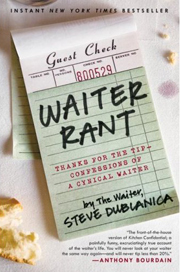 I haven't posted many book reviews since I relaunched this weblog. Not that I didn't want to, or was at a loss. Quite the contrary. I have a number of books I would { have } like{ed} to talk about. Many of which on web design or related topics. As well as travel stories, bios, Indian tales, etc. But no. I kept silent, by lack of time, attention, will or skills. I don't know.

Anyway, the book I wish to talk about here was an Audible pick on episode 102 of MacBreak Weekly, a favourite podcast of mine. I was in search of something to listen too, and this recommendation was spot on.

The book admirably narrated by Dan John Miller who brings it to life in all it's splendour. So much more than just a collection of waiter's anecdotes, it leads you into the intricacies of the food serving world, the delicate balance, power struggles and all aspects of the restaurant business.

Most of the book takes place at a New York City restaurant named "The Bistro" (pretty generic, no?). The waiter gives us a composite picture of his life as the waiter by observing the mesh of interactions between the management, fellow workers, and customers. The good, the bad and the more than often ugly.

I enjoyed the psychological angle. I love the way the Waiter analyses his doings and feelings, manages his relationships with others, and draws a philosophical portrait of the waiter's trade. Most of which can be applied to other trades and people. I love how he balances his criticism with empathy for all and how he shares the truth about sanitation, poverty, relationships, self-confidence and bad customers. It's a tale of a man who chose an occupation out of despair and became excellent at it while preserving hope for the future by tuning out his passion.

I read that a number of the weblog readers were disappointed by the book. I can't speak for them, but I've added the weblog to my blogroll since.

He's a waiter. He's really a writer. Refreshing. An engaging read (or listen).