The Empty Set has been on the back burner for a little while now, one reason being that we travelled back to India this winter for a little under a month. Add to that the end of year rush and you have the whole picture.

My personal weblog might have been quiet, but we nurtured a family travel weblog during our trip, posting tweets, photos and texts. We called it Sravana (read why) and hosted on Tumblr where it stands as an electronic diary of our trip.

I thought I’d share with you my 5¢ worth regarding this experience.

I’ve always loved Tumblr, ever since I discovered it back in 2007 (?) after listening to Merlin Mann talk about it on Mac Break Weekly.

For those who haven’t heard of it, Tumblr is a blogging platform that allows users to post text, images, video, links, quotes, and audio to their tumblelog, a short-form blog. Tumblr’s emphasis is on customisability and ease of use. And it’s free.

Over the years I’ve played around with several tumblelogs but was surprised to discover its current range of features. After opening a new account, I spent some time customising the layout and adding a little behaviour, trying out personalised fonts via Typekit, and experimenting with a few CSS 3 properties to spruce the whole thing up a bit.

So when came the time of chosing a plateform for our winter trip, Tumblr stood out. 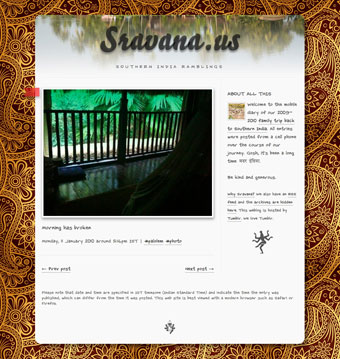 Tumblr offers numerous ways of posting entries, ranging from a web page, dashboard widgets, email, iPhone app, instant messaging, SMS or call in audio. And if these weren’t enough, Tumblr hosts a page that lists all the third-party apps available.

We were setting off with our iPhones as sole mean of data input, no laptop, MacBook or Netbook. Tumblr’s iPhone app offered a simple and strait forward mean of uploading and editing content, with email and SMS (or even voice) fallbacks if the app failed for one reason of another.

Additionally, the tumblelog was set it up to aggregate tweets baring the #sravana hashtag and Flickr photos posted to the >Sravana set, diversifying the data input sources. 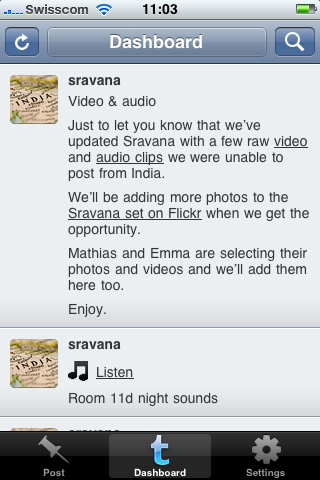 It turned out to be the right choice as our most successful upload channel ended up to be email. The iPhone app had trouble dealing with timeouts on the flaky data connections we encountered. On the other hand, it handled edits and drafts much better.

I had prepared a number of posts before leaving, typically Google Maps entries to pinpoint the different locations we intended to visit. These were saved as drafts and published when needed.

All entries were tagged with the location and the media type which enables tagged generated pages of posts per location (e.g. #palolem), or posts of a certain kind (e.g. #photo). The video assets are hosted by Vimeo which integrates smoothly in my setup as I use Vimeo to host my online movies.

The published dates can be edited to reorder posts, but unfortunately creation dates can’t be modified, resulting in inconsistencies when browsing on a post by post level. The order of the previous/next posts is based on the creation date (or entry id - 327143126 in the above example) and not the published date, so some entries appear as out of order. Typically all the entries posted as drafts before we left. This doesn’t occur on a page by page level navigation.

This is a minor constraint to live with with regard to all the facilities and ease of use Tumblr offers. I can live with that.

Tumblr is a great tool for travel logs, and shines by its wide variety of data inout channels it offers. It supports your own domain name if you wish to, numerous themes to change its layout, or the possibility of designing or customising your own at will.

For those wondering about the customisation, all the assets (images, icons), including the main CSS style sheet and javascript librairies, are hosted on this weblog. Doing it this way makes it easy to tweak and experiment as you go along. Check out Tumblr’s custom themes help page for a list of variable elements.