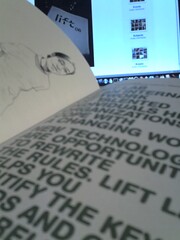 Anthropologist at Nokia Tokyo. Telecommunications have been around for more than a century. How do you design for users? (Example: indian girl: one mobile phone, sole electronic device in home, layed on the altar because it is the only dry place in her home). Diversity.

Lasted for three weeks. Entry form (single A3 sheet). Studio visit to complete the form. Children brought parents, family, friends. Entry form was completed with an interview. Photoshoot. Everybody was given a printout. People went home to change into nicer clothes. Select a winner. Award ceremony.

They felt proud telling what they thought. Winners were selected.

Distinctive aspects in each community:

Mumbai. Loudspeaker to make announcements. Mango and heart shape phones. Symbol of love. Device symbolism.Phone always close to the heart. Bottle shape phone stores water and floats in water. Help in emergencies. A mobile phone that never falls from hand, and if it falls never breaks. Those ideas were wished by so many people. People keep mobile devices for long period of times.

What would you design for an indian girl? What did we lean through Open Studio?

Time limit. What can you learn in 2 weeks? It is short, but it will bring fresh aspects for designers. Seeking the relevance to technology to their lives. Subjective perceived value of technology. Cross reference with other street surveys and ethnographic research results.

okay, here's Nokia's pitch to field work "we are listening to you" trend. I would beware of the stats of these kind of operations. Two short, too few people. Interesting per se but I'm not sure this is relevant beyond giving Nokia some kind of good conscience.

Ethnology, anthropology. Works for Intel ("we're 30 working for Intel"). Find out how people use technology. Check out her book: "Secrets, lies and digital deceptions…" -- Genevieve Bell

The ways we use to protect our identities. Lost Flickr password. Lied on birthdate, location, etc. Most people (45%) lie on their location in the UK. A 100% people online lie (men about height, women about weight).

Arms race of digital deception. Emissions and admissions? What might an ethnographic approach help in better understanding these phenomenons.

Technology changes faster than people do.

Secrets and lies. Lies = untrue. Secrets = do not disclose, withold. In all cultures or religions there are situations, when not telling the truth is okay. "It is okay to say a 1000 lies if the wedding still happens", "white lies".

Gap between what we say and what we do: we tell lies all the times (6-200 lies a day) 40% to conceal misbehaviour, 14% to keep their own social word ticking over, and 9% to increasing one's own popularity.

Lies is a necessary part of life? It it not the opposite of truth. Part of human survival. Actively repress what is going on around you. Form of play. Work through what is appropriate or not.

All info should be available equally to all. Recent notion and concept. Secret and sacred. What appears to be in the public domain is already coded. Witholding info is a way of keeping it safe. What we choose to withold and why denotes what/how we choose to shape our own reality.

Digital deceptions. Lying about where, what, how, who you are (context, intent, identity). We are dissemble online. 10% of MySpace is over the edge of 100 years old (US laws require you to be > 18yrs old). Lies protect private information.

Guilt, shame, worry in the real world don't transpire when lying in the virtual world. Denying realities. (postsecret.blogspot.com) Twitter is about making confabulation into art.

Cellphone have tracking services attached to them. Use of video camphones, lie detection algorithm on SMS/email (the more words you use, the bigger the lie). Alibi services to create whole back stories.

System and networks worry about privacy, people don't think that way. People tell lies to withold, change, reshape reality. Social networks ~ bedrock of confabulation? How do secret and lies offer new ways to think about all this.

Another constructor's pitch. This one went doen better. Much more academic than the previous one, it unveiled original ideas and angles to the whole concept of "online privacy" in regard to previous studies on "real world privacy". Slides were too crowded. She would have benefited from simpler more illustrated slides. The last one reminded my Seth Godin's talk at GEL 2006: it was a superbe illustration of "something's broken". A road sign post stating "Don't trust your sat nav system, narrow road". Technology lies too.

University of California Irvine. Getting from here to there (ethnography, design, privacy, location). Misunderstanding about ethnographic results relevance to design.

Approach mbility from tech point of view: latitude, longitude, services, localise, mapping, etc. From an ethno point of view: home, colony, pilgrimages, asylum, migration, nomad, dispora, etc. - very different concepts. Symbolism++ on who we are, who we think who we are.

Space through which we move take a meaning, depending on personal experience, population structures, deeply grounded in questions of identity and belonging. Refugee status is a claim of ethnic status - the movement in different space that allows them to do that (form of categorical identity).

Morality of forms of presence and habitation. Exclusions. Ex. Parole sex offenders with GPS devices (abrogation of their civil rights to privacy).

Focus on the analytic contributions.

As he pointed out, we were getting hungry by the time Paul arrived on stage - 30 minutes late. I had trouble diving into his speech and tended to float over it instead. Another academic approch to the ethnological/anthropological view of mobility. Superpose the online concepts with the real world one, and it gives you food for thought.

Back in the conference hall, had lunch, chatted with a couple of German guys about yesterday's workshops, eve dropped on the TSR crew's views of the event, and had my photo taken. Bruno Guissani is moderating this session "Stories".