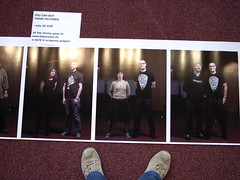 This track is aimed at hearing the stories of entrepreneurs and communicators, their successes and failures as well as their motivations

Remember the Minitel? Rafi was involved in its development and founded Violet and invented the Nabaztag. Sweet.

Lets get to meatspace. Calm technologies. Bandwidth of attention is critical. People have small amount of attention. More things on a screen is not a solution. Ambiant lighting? Spray info in the air? Reaction of things?

Something was happening in the rest of the industry. Why do teddybears sing? bathroom scales moved from analog to digital. All makers have this problem: obsolescence of what they do. Chips everywhere. Just for the sake of innovating. Yeah.

Domotics, interaction homes, but it never happened. Why? Not appealing. Sucks. No fun. not sexy. Price tag sucks. Too much effort. Proprietary technologies. Strangers in their own home.

One day, okay. But how do we get there? From the Flitstones to the Jetstones. Stop doing cheap stuff, but affordable, don't make it too useful = boring. Include fun factors and features that interact with other people. Keep it simple with open standards. Expand the internet to object. Put the user in the middle and empower him. Don't think you can do everything. Open it up to the world. Build a community.

DAL Lamp: 1st internet connected lamp. Changed colour with traffic info, etc. turned red when an email left with the word "love" in it. Here came the Nabaztag in 2005, and the Nabaztag/tag in 2006

Ambiant Informstion Device. Nabaztag is good at things that are "good to know" but not worth the effort.

Exploring new way in which objects don't have to disappear to exist in an interactive form. Use the book as a book which becomes interactive. Network building in the next version, choose your voice, share with friends.

Ztamps: use of RFID tags and stick them on everyday objects and select triggers and actions.

The idea came from a misuse of an industrial coffee machine: foam = air + water + coffee oil.

The N of Nespresso is born through the desire of seducing the women who found this virile product appealing (two high heel shoes).

Nespresso represents approximatively 1% coffee drinks in the world. Aims 20% soon. Out with the aluminum, in with polypropylène.

TPresso: 15 years of research, will be launched this year. Tea in capsules. Tea from Chamong, Darjeeling.

Starting blogging before the name was coined. B92 blogging opened in 2006. In Serbia only 30% have access to internet. Blogger about war crimes.