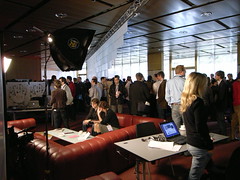 With LIFT going to Asia, we want to share the ideas we have been most impressed with, with you. To do so, we have a special track dedicated to technologies in Asia.

China. The future of telco is in China. 1st time that a tech is more used in developping countries than in developped countries.

Diversity in Asia. Penetration of mobile will outstrip that of computers. 5-6 million new customers per month.

War of standards. China developped their own standard: TD-SCDMA. The state is never far away from technology deveoopment.

Innovative usage: crowd shopping. 500 people gather to negociate a discount on the spot. Colour coding content of text messages according to nature of content. Super Girl when critical mass become critila masses (voting isn't something people do in China).

The future of mobile telephony is in the countryside. Mobile communications means different things to differents people.

How teenagers interact with social software in Southern Corea. Broadband penetration amounts to 26% (almost all households). Average of 47.2 hrs/month online.

Having trouble sustaining the blogging.

Japan has more mobile internet users than PC users. Corea was so far ahead in terms of internet access, the Corean government developped their own encryption algorithms, and so if you want to develop secure applications, you must use Windows ad IE.

Open source in Asia. Are Asian contributing to open source? Barriers to participation. Culture, language, education. Linus feels the culture is the strongest, but no one knows why. (what about Ruby?)

Bhutan developped their own OS (Dzongkha Linux based on Debian) after MS refusing to port Windows to Bhutan in 13 months for $80,000

Cultural barriers: differences in how people participate in projects. Direct confrontation, criticism is natural in the West, but less in Asia.

Language is a huge barrier. De facto language in OSS is English.

Economics. Cannot choose type of technologies they use, or projects they work on. In the West, a typical OSS developper has a day job, and works on OSS in the evening.

Western conceots such as meritocracy are not necessarily understood in Asia.