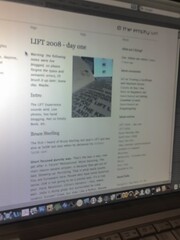 The first I heard of Bruce Sterling last year's LIFT and was also at SxSW last year when he delivered his brilliant 'SxSW rant'.

Short focused punchy way. That's the way is was, now get after it. future? Motivational. Moral boosting. The main reason people prosper, is because they get out of bed. Showing up. Persisting. That is what really counts. You are Europeans here. People who have some historical sense. 208 is not going to be a pivotal year. It's a crap year. Hard. Recession. China's olympics - nice, sweet, well.. India is doing great, but surrounded by crazy lunatics. Europe? Great, but slow. Like a Python. Slooow.

Global warming? A 200 years old problem. Not an issue. Our children's children will have the same problem. Technological? Is it fun to watch MS eat up Yahoo? MS is boring. Gates left it was so boring!! Gates would rather cure malaria rather than pretend MS is the road ahead…

Prophecy: how you can deal with phemoenon you are sure to be confronted to. Practical certainty you'll see it. More and more. If you do understand what is going on, you probably won't like it very much. But you'll cope. Madame Carla Sarkozy. First lady of France. First time they meat what at a tech conference.

Repress peer to peer networks on French soil. In a french way. Carla is a product of a technology internet romance. A black swann. Historical event, unpredictable. 9/11 was a black swann. Black swanns can be good as well as they can be bad. Digital renaissance.

Sarko has multipled his options dramatically. Carla capable of anything. Not a journalist in a world ciuldn't write Carla-Sarkosy a story. You are going to be swamped. It is simply the most interesting story there is.

They don't no the future any better than you. Failure is alway most likely. If they get away with this, crowds of politicians will be liberated to have the same personal lives. Evil. Bad for us.

In 2028 "Carla Bruni? That sounds so early 21th century". Internet was a black swann too. Internet doesn't need political favours.

90% of success: showing up. You survive to see it. You become the future. You live. You are it. That is how life is best enjoyed.

Very Bruce Sterling like. Provocative, punchy, funny and pertinent. A verbosed and graphic talk rant. If showing up is 90% of success, there's hope.

Founder of french media group Skyrock. Largest weblog plateform in Europe. Started as a pirate broadcasting at the end of the 70ties. First radio for the 13-24. Very simple blogging plateforme to use. First French speaking network in the world (French represents 5% of worldwide users). 17th site in the world in pageviews - amazing to be in the first 20.

The world teenager social network aming to be the first site in the world. In order to grow, you need to constantly change. The netamorphosis.

The mother of all social networks: e-mail. Social nets are for e-mail what search is for the web. The blog becomes your new digital identity, as opposed to your e-mail address which doesn't give much info on your per se.

Center of electronic exchange: a lot of new teenager users don't use their e-mail anymore, but their profile for all their electronic exchange. The social net if the future of telecommunications. Skyrock has created a piece of software.

Vision: the mobile phone is evolving to a poket size internet terminal. Physical and digital identities merge because they share the same physical location. Always together.

The telco companies will fight to control that OS, that social interface. Because that is where is value will be. Change provider in two clicks - more complicated (and dangerous) to change social networks.

Each PC will be a terminal and a server at the same time. Terminal and distant software merge. PC and mobile software will merge too, and the mobile OS will dominate.

Access to spectrum. Open access to create that system. Compagnies can't let the telco control the spectrum. Look at Google's big to buy a wavelength. Battle for spectrum. Battle for code.

The world of social network is going to change.

I never thought Skyblog was as big as that, it is quite amazing. Most of what was presented makes sense, moreover with what Google, Apple and other are getting up to. Telco companies should start worrying and changing. Open up guys. Content and people are the real power. SkyRock will eat you a up.

Permeability: real life + virtual life = one life. We have different identities. Why? What is the reason? Safety. Survival. Evolutionary. Communities: come together to be safe and evolve safely.

We need to feel connected. People get marginalised if their identity isn't liked. If people feel they don't quite belong they either rebel (extreme identity display - tattoo, piercing, speech), or they close in hide, become depressed.

By being in the virtual world, they were able to express those facets that were repressed. They became stronger. Self esteem got higher. Depression lifted. These good positive benefits transpired back into the real world.

Strange juxetaposition between the two worlds. Felt more real in the virtual life. more phoney in the real one. One participant asked why the two worlds were always put side by side. They are both part of the same world. One world. Life v1.0

This was a enjoyable talk fairly well delivered in a very professional way. I particulary liked the broader anthropological light he shed on the topic. Made a mental note to checkout his research.