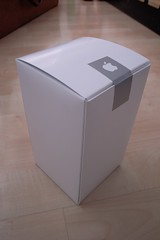 I wasn't sure to attend, but curiosity got the best of me. Not curiosity of the store itself as I was very much sure it would resemble closely other Apple Stores as the initial pictures showed up online (thanks @lynxman). No, I was more curious about the crowd it would drain, about those fanatics who are ready to stand in line for hours, about the atmosphere, the vibes, being part of an event. I wanted to meet Mac g33ks. Was all this possible in Geneva, Switzerland?

Incidentally, a meeting having turned short so I got there 30 minutes before launch and very naturally joined the line which was still short. I must have been in the first 200 people. The line grew rapidly after that.

It was a curious mix of people of all stems of life. A interesting mix of ages, social status, motivations, looks and glares. People were curious, generally happy, chatting and laughing with their neighbours, the more passionate sharing their experience with the others. Mothers with their teenage sons and daughters, business men pretending to look elsewhere while whispering in their bluetooth devices plugged in their ears or tapping on their iPhone virtual keyboards, youngsters betting on the number of t-shirts they will be able get out of the event. Cameraphones were held high over the people's heads in an attempt to pixellise the moment. Incredulous faces glaring out from behind the bus or tram windows swept by from time to time while the queue grew longer.

Something was in the air. A little something, shared by the people standing in line. Nothing like you might experience in SF, NYC or London, but hey, we're in Geneva, Switzerland after allí¢â‚¬Â¦

Five minutes before the opening, the whole staff came out, clapping and cheering the crowd, running up and down the pavement in their cyan and orange t-shirts. The countdown begun. Security tightened, men in black suits with crewcut haircuts and plastic earphones appeared from inside, lining up in front the main doors. Gee, they played it up to the last minute. Two catch like plain clothes bouncers seemed to direct the show, shouting out orders in English to the men in black. Wouldn't want to mess with these twoí¢â‚¬Â¦

Suddenly, from inside the store, the staff counted out loud the last ten seconds before the doors opened and the first flow of people were let in through a row of smiling staff cheering and handing out the t-shirt boxes. Welcome to the Apple Store. 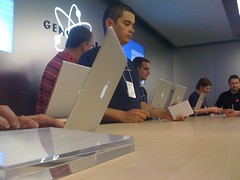 The place seemed smaller than I anticipated, but it was crowded. A long corridor lined up with the latest iPods and MacBooks leads you into the main hall with the Genius Bar on the left, the accessories' racks on the right and tables with all of Apple's hardware presented, ready to be tried out. The main hall's ceiling is opened to the sky through windows which should let in the daylight (or moonlight?) and give a pleasant atmosphere. The staff is young and friendly. I chatted with a couple of members of staff and a Genius and I was please to feel they knew what they were talking about, were happy to talk about it, and even had a tinge of passion in the background. Uncommon for Geneva in this retail industry. This will workout fine.

WiFi was barely available. I managed to connect only briefly to the store's network before dropping back onto EDGE. I'm pretty sure this will be fixed in the coming days. I wandered briefly around the store, observing more the people than the hardware, before leaving the floor and letting the reminder of the queue access Geneva's first Apple Store. The queue was still long out there, I bet they gave out all their t-shirts before nine o'clock struck.

From the street, the store is rather discreet, even a little overshadowed by the next door tax free perfume shop that stands out more prominently. A small Apple logo on a grey background sticks out only visible if you come from la place du Molard, out of sight if you come from le Rond-Point de Rive.

I guess I'll be back before long.

And more information at,