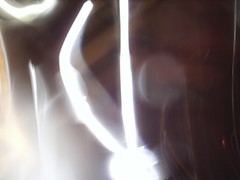 There are days when the hardware lets you down. I've noticed a significant increase in the frequency of hardware failures these last years, part of them related to quality control (see below).

More personally, I've been experiencing a hardware failure prone state recently. In less than a week, My Ricoh GRD digital camera died, my iPod Nano crashed beyond restore and my MBP suffered from a Bluetooth hardware failure.

How to sync sink a Ricoh GRD

It is a sad story, for which I bear the full responsibility. FoWA's second day had just wrapped up, and we were enjoying a pint of beer before heading for the Restaurant Les Trois GaríƒÂ§ons near Shoreditch for the evening. The light was low and I propped up the camera on the rim of my pint glass. Framed Mathias, set the selftimer and leaned back. Then I repeated the previous sequence, with the camera aimed at myself. The instant before the shutter opened, the camera fell in my pint of beer. Incidentally, it took the picture through the beer, and a fuzzy one of Enrique after that in a desperate last breath. Damn.

Nevertheless, the dinner at the Restaurant Les Trois GaríƒÂ§ons was a great success. Thanks Mathias.

The next day, we flew home from London with British Airways, and my MBP got showered with water while the flight attendant handed an overfilled glass of water over me. I was shocked by lack of responsiveness of the crew. I understand accidents happen, but at least I take my responsibilities when I cause one. The crew was arrogant and disdainful to say the least. Anyway, 5 days later the bluetooth hardware vanished, the fan rotation speed shot up to 7'000 rpm and the MBP overheated - even while sleeping. After 90 minutes on the phone with Apple Support, a hardware failure was diagnosed and I handed my MBP over to MacRepair. I hate doing that.

Eventhough I have a full backup, I don't like parting with my notepad, I don't like the idea of giving admin access to it while I'm not nearby. It's only a material object, like Enrique likes to remind me. He's right of course, but I can't ignore the emotional bond that ties me to my notepad. I must confess that just after leaving, I spied the receptionist through the window to see how she was handling it. Pathetic, no?

A crash reduces
your expensive computer
to a simple stone.

Is the BA incident related to the hardware failure? I don't know, and I don't care to tell you the truth. There is a thread on Apple Discussions that relates to this kind of hardware failure. I am just looking forward to welcoming my MBP back home.

This comforts me in thinking that the level of hardware quality control has lowered seriously these last years. The first MBP I received last October was DOA, a brand new one was sent out from Shangai. Disk drives tend to fail more often. I lost two and witnessed 5 crash beyond repair over the last 12 months. Having said that, the number of disk drives we use increased too over the same period. Google has published an interesting article on hard disk testing they performed on their disk drive population.

I fought a lost battle with MGE last autumn regarding a Pulsar Ellipse Premium UPS that didn't work properly. The USB interface stopped working after a few days. After numerous e-mails and registered letters, they acknowledged the problem and sent out a replacement unit while they repaired mine, but both the replacement unit and the repaired on failed just the same way (note: the postage was on me). After that, they suddenly stopped responding to my e-mails and letters agin. I eventually got tired of fighting and acquired an APC unit that works flawlessly for my server while I use the Ellipse on my workstation (which I shutdown every evening). Don't buy an MGE Pulsar Ellipse Premium if you intend to rely on its USB port or count on its 5 years warranty.

Don't trust your hardware or a pint glass. Backup often. Get an extended warranty (AppleCare e.g.). Be ready to fight for your rights.