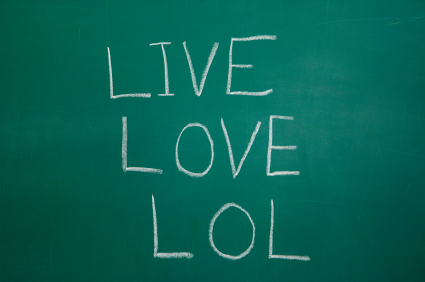 A side effect of today's prevalence of text messaging, instant messaging and especially Twitter as means of communicating is the increased usage of acronyms and abbreviations in the content we broadcast, which's length is slimmed down by choice or by constraint.

I live in Geneva where the main language remains French. Most people I communicate with have some fluency in English, but most lack the geeky online culture in which these abbreviations are the most common. Even though a number of them have been translated into French (e.g. LOL becomes Mdr), their English counterpart still prevails and bewilder a number of people I know.

There is a generation gap which adds to what precedes, as the younger people tend to embrace the web and its culture as ubiquitous.

All this isn't without reminding me of the days when CB radio («ham») was popular and how the slang used by aficionados fascinated me. Secrets and double meanings in ordinary words. I loved it.

There are loads of web sites out there that give you lists of the common abbreviations used in text messages of instant messages, but if I had to pick two, I would suggest:

BOT: this entry is getting far too long. All I wanted to do this morning was to share my favourite 30 with you.

Have a great weekend!
88

Currently playing in iTunes: If You Knew by Mélanie Pain