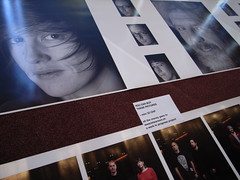 Warning: the following notes were live blogged on Friday by session, so please forgive the typos and semantic errors, I'll brush it up later and break it up ion separate posts. Some day. Maybe. Watch the videos.

Both an academic and practitioner and works for Electonic Arts. She is designing games for the Nintendo Wii (such as My Sims). Robin will describe new trends in gaming practices: user-generated content and the importance of social software.

People are fun, computer are also probably fun - not always. Lets change that. Think about games. That is fun. AI is alos fun for people like me. Lets put them together: The Sims. Simulation and AI.

Fun is a hard word. Doesn't mean anything.

M D A. M is for mechanics, rules. D is for dynamics, what happens when the player interacts with the rules. A is the aesthetics, what you take away from you.

We love the rules, we "design" the aesthetics. A lot of things can impact the dynamics, no control. Must give a little. Accept we can't control the dynamics.

Power = hard to simulate. The magic circle that's made from a game that lets you mix things up, exchange roles.

Knowing where I am, where I'm going, who I am becoming = space of gameplay. The axe of the game.

There is a reason they exist, and become exploited. The mechanics are kind of hard to make it feel more and more real. Lots of work. Grinding.

Real vs. Fun. The aesthetics can drive the mechanics. Power combined.

Apps not games. Why should you care? Facebook is a game. Chatty, social, automatic, fast, rewarding, repetitive, selective, etc. Adding friends, chatting w/them. Huge franchise from a game perspective. What are the mechanics the Facebook is doing well?

More friends. Graffiti. Gifts. Hugs. Laughter. Wins. Pictures. make me feel like I'm winning/living. FB lets me decide what the game is about. I can choose. I am reflected. Is me. In a way many games are not. FB is about me and not all of us. About the people that use is. FB has nailed it.

What is the aesthetics of FB: I am living a fun life and I am loved. How many games we use make you feel loved? How many apps make you feel rewarded?

Chores. The things you do everyday. Feels like work, even a relationship can feel like it if there's no reward. Judge not [insert buddha here]

Does it feel good to me in apps? Sometimes. In Flickr it is awesome. Focus on achievements. Give them spaces. Put someone else in the center. mobile, create, communicate, etc.

From Oberon Media, will talk about casual gaming and the evolutions in that field.

Plateforms: PC, online, mob phones, etc. What are casual games? Check out the movie at http://www.escapistmagazine.com. Addictive game easy to play at.

If hardcode video is a full meal, casual games is a snack.

People play between 9 to 5 - waow price of 1 working hour in the USUSD 363 000 000 000. People are spending online games, and casual games, than FB or YouTube. Basic motivation: instant gratification. Addictive content. "Give the first bit for free, and they'll just come".

Puzzle games are the most popular (>70%), word games, board games. First people shooter is 5th.

1985 retail (box) to 2007 social networks. Social networks and games are blending. The Corean market is the most developped, advanced (Kartrider 1 out of 4 play it)

Paul Barnett, the Creative Director for Electronic Arts Mythic, oversees the design of the upcoming MMORPG Warhammer Online. A pioneer in MUDs and MMO game design, Paul will describe evolution of the massive multiplayer environments.

I love the history of cinema and Vegas casinos. Usually, gaming industry resembles cinema industry. Too many people, too long, too expensive. I can do better. Movies flourish.

Online games are great, interesting - I earn money when you buy them. We've mapped the globle for single player games - we think. The online space is in the middle of huge oceans of unknown.

Designer type #1: experiences. They can tell me anything, value anything of what they've seen, but they can0t build intuitive loops.

My job is to put the two together. Casinos in Vegas: lot of people build them, late, I can do better, draw you in, take care of you, welcome, lead you ito all the different ways of enjoying. As long as you honnor the subscription model. Give them money, get free drink, go home. Copy, bigger faster than your neighbour. Casino thinking doesn't work in gaming.

We are massively insulate. Don't mix enough, not open enough. Change is the inevitable burden.

Founder and former CEO of Infogrames, will discuss the implications and opportunities of robotics in the leisure industry.

What other changes can we expect? In the past, videgame started in the 1970ties after overcoming tech issues. Power, graphic display, data storage, oday it's tie to change the interface.

What is the big wave? We are going into a robolution. Interaction with natural objects. Playing with a smart soccer ball. A room in your house that interacts and makes you feel like in a jungle.

We are going beyond the screen/console. It's loong way. Today's robots are for techie or are just toys. Interactions are poor. Capacity of integration is low. Energy - gasp. In the 1970tie we had profucts b&w screen and 8K memory. There will apps that make sense for the mass market.

Today, when you see a robot, its' a bit like a phantasy. What it is, you want to interact with an object in a much simpler way. Today, it's a smart vaccum cleaner. Give it a name, talk to it. Ask it to cleen the floor, with "please" and "thank you". The stock market is probably the most marvelous online game ever invented.

The gaming industry is only the brain of a larger industry: robotics. The evolution came from the technology. From invention of the interface that grow from the Atari (that did invent Pong!).

What kind of interaction? Friend, compagnon - cool. Gender issue with robots at one point. This won't be the issue. Will we want to talk to objects at the end of the day? Dunno. You talk to your friends through typing most of the time. Why should it be normal, shoudl we be forced to communicate with machines the same way we communicate with people. Food for thought.

If the communication is based differently, you can be happy. Waving your hand instead of talking. Don't see it in an old fashion way.

There's lots of issues today, but you can build an interaction. A bit like an evolution of toys. Video game industry was an evolution of games. Robotics is a new field. Requires new views.