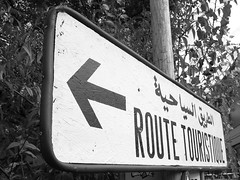 We spend an enchanting moment Saturday afternoon listening to Hamed Bouzzine wrap us up in his Moroccan tales.

It was part of «Les Nuits du Maroc» festival (Oct 4-13th) organised by the Ateliers d'ethnomusicologie, and took place at the Théí¢tre du Loup. The program is diversified to say the least: concerts, conferences, workshops, films, children shows, discovery of the Moroccon cuisine in music, etc.

We went with Emma to the children's show. It was magical. Hamed Bouzzine set the atmosphere immediately, and gently lead you in to his world in the very first moments he started to speak. He has a totally sensorial approach to story telling, using music to emphasise and dramatise key events or set the vibes and the mood. The audience is called in to participate in those recursive phases when the same people, places or events are repeated over and over again.

You slowly get entranced in the rythme, that beats like a mantra, and suddenly wake up to reality at the end of a tale, with a smile or a laugh.

Hamed Bouzzine masters the art of story telling, and performs with great humility that generates respect and admiration. Don't miss him if he comes to a theatre near you. To give you an idea, the «Rossignol de Fès» is available online (courtesy of La Maison Internationale du Conte).

We slowly woke up to reality in the Berber tent setup outside the theatre, drinking mint tea, watching henna tattoo being skillfully layed out on arms and hands, and simply relaxing in a friendly north african atmosphere until dusk.