My iPod Touch was delivered yesterday around 3pm, and I've been playing with it since. The iPhone hasn't reached Europe yet, and isn't announced in Switzerland at al for the moment, so it was my first contact with the new multitouch screen user interface. It is stunning.

The packaging is very neat and compact. I was first surprised by its size. It's small. Like the other iPods, it comes bundled with the bare essentials: headphones, USB cable, a small plexiglass stand and a dock adapter. It needs to connect to iTunes before you can use it. After it's all honey and cream. The display is simply gorgeous. After reading blogposts on various problems related to the display, I was a little afraid, but it looks great. The resolution is terrific and compensates the relative small screen size. I believe you can actually watch a movie on this device.

I hooked up to my WiFi network in a matter of seconds and on internet just after. My Safari bookmarks were transferred along with my contacts and calendars during the initial setup. Neat. Everything works just as advertised, and reviewed by numerous writers on the net.

I was curious to discover the iTunes WiFi Store. The user interface is very clear despite the space limitations. The buttons at the bottom let you browse New Releases, What’s Hot, Genres, and Top 10 selling songs. Or find exactly what you’re looking for with a quick search. The search function is fast and displays results while you type. Preview or buy a song (or an album) with a tap. It didn't take me long to buy my first songs.

The songs purchased on the iPod are supposed to sync back to your iTunes Library when you connect your iPod to your Mac. Well, they don't if you've turned off music synchronisation like I did. And there's no obvious way to find out how to transfer them. Turning sync back on warns you it will wipe the iPod's music library out - ouch, I didn't dare to do that. The trick is to right click the iPod in the Device's list in iTunes, and select 'Transfer purchases'. An additional Purchase list will then appear in the iTunes Store section.

You need to be signed in to the iTunes Store on your computer for your account info to be transferred to the iPod.

The Feature Guide is available online. 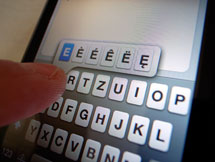 The iPod Touch supports several keyboard layouts: QWERTY, QWERTZ, AZERTY, QZERTY, and Japanese IME. Add keyboard layouts in the Settings. To type an accentuated letter, keep your finger pressed on the key and a small pane (a bit like like a popup menu) with the extended characters will appear over the zoomed key. Just slide to select.

Double-click the Home button to bring up on-screen playback controls, even when the screen is locked. Cool.

Double-tap the space bar while typing to enter a period followed by a space.

Disk mode has gone. It won't show up on your Desktop.

My major gripe, aside the fact you can't add events to the Calendar, relates to a localisation shortsightedness: why doesn't the iTunes WiFi Store's language match the iPod's language setting?

I have my iPod set to use English, I live in Switzerland and the iTunes WiFi Store's UI shows up in a mix of English and German (Switching the iPod to French doesn't change anything - same problem).

The bottom buttons remain in English, while the page titles are displayed in English until the page is loaded, then switches to German (sigh). Typically, "Top Ten" become "Hitlisten" once the page renders. The "Featured" page is worse as the labels dont even fit in the three tabs at the top of the screen.

iTunes doesn't display this behaviour. My Mac OS is set to English, and the iTunes Store is displayed in English (except for a few screens such as the ToS for example).

I find this especially irritating. We speak 4 languages in Switzerland, and Apple has always honored this fact by offering at least Swiss French and Swiss German pages throughout their websites, as opposed to companies such as PayPal, eBay or MySpace, just to name a few, who default to German. Punkt schluss.

It is worth noting that the iPod's Region format (Settings > General > International offers Swiss French as a choice.

Why doesn't the iTunes WiFi Store honor the language chosen in the settings? Have I overlooked something? Can it be changed somewhere? I love the iTunes WiFi Store's concept, but to have it in partly in German, partly in English casts a shadow on the user experience. I trust this will be dealt with in a future release of the server application (Apple Discussions).

Apple recognizes that no one is better qualified to provide feedback about iTunes than the people who use it.

I encourage you to use the iTunes Feedback page to submit your comments: http://www.apple.com/feedback/itunesapp.html