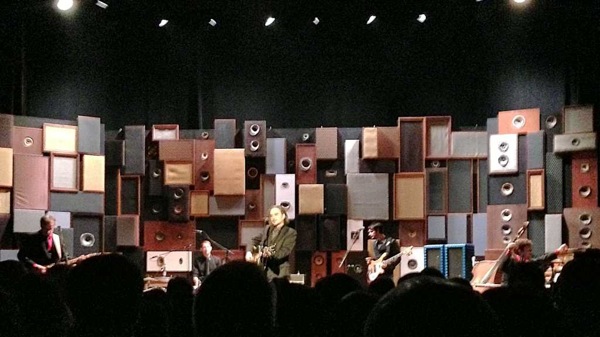 As many of us yesterday, I go back a long time with regards to Stephan Eicher, as far back as «les filles du limmatquaií¢â‚¬Â in 1983 - gasp. No one is getting any younger, but some of us have certainly grown old. I'll be damned.

I have never experienced such a lame crowd at at rock & roll gig as last night's. Gee. As if they'd all lost their soul somewhere on the way. Few were smiling, none were dancing, let alone jumping or singing. But they were all politically-correctly-well-behaved, clapping when they should, etc. But hey, they were BORING.

There were those who couldn't keep their gob shut, and couldn't help to to offer everyone around a running commentary of stupid empty minded remarks on what was going on WHO CARES? Just shut up and enjoy the show!

Then there were those who can't stand being in a crowd and defend their 50cm2 with acid remarks and violent elbow kicks. Hey guys, this is a ROCK & ROLL gig, expect people to express what they feel by dancing, singing and jumping (and making their way to the front of the stage to share it with the band).

This said, the gig was great. Stephan Eicher delivered a superb show, well rythmed and full of emotions, but sadly wasted on a bunch a creepy Sunday afternoon ninnies in their slippers. Makes me sick.

Where's the sharing, community, in trance feeling gone? I really had the impression people were consuming the event, not living it. It must be really hard for the bandí¢â‚¬Â¦

Dear Stephan,
I enjoyed your energy and positive outlook last night.
The flame still burns in some of us.
Let the others rust away. Cheers mate.