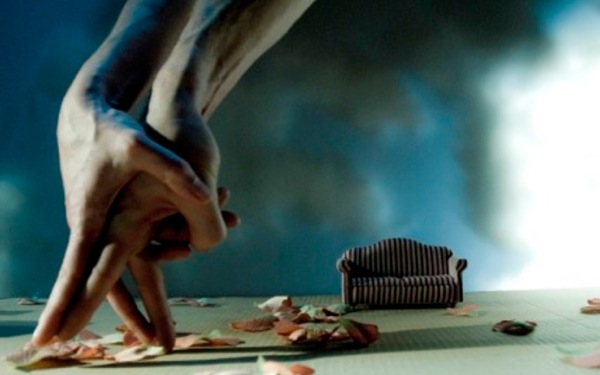 Last night, Fabienne and I had a night out and went to the BFM to watch í¢â‚¬Å“Kiss & Cryí¢â‚¬Â, by Michí¨le Anne De Mey and Jaco Van Dormael, organized by the ADC.

It was dazzling. I was taken into their worlds as soon as it began. A suite of delicate nano dance scenes, all performed, framed, filmed and mixed in real time. There isn't a dull moment, no downtime, only renewed excitement and a wealth of emotions.

They are ten on stage with an impressive set of technical and less technical gear. Before it begins, the stage looks crowded, almost messy. But once the lights go out, the carefully crafted images along with the background music take out away. Far away.

They took me back to my childhood worlds. Full of wonders and amazement.

I'm not sure how to categorize this kind of show, midway between dance, cinema, theater, DIY.

Not only are you watching actors, comedians and dancers perform a real show and tell a story with their fingers, you are also watching the making of a film, from behind the stage, as well as enjoying the show as a spectator, all at the same time.

It is dazzling. Overwhelming. Enormous. As if you were in two dimensions at the same time. I was deeply touched by this performance, it brought back a lot of memories through all its references to the Arts and the cinema as a whole.

I feel it is a new kind of language, at the crossing of arts and technology that jolts your imagination and drowns you in emotion. Highly recommended.

They are giving the last performance today at 18h00 at the BFM. If you are in Geneva, don't miss it. Tickets sold online and 1 hour before the show starts at the BFM.