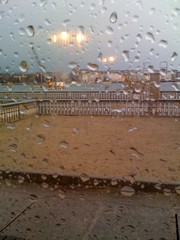 One story is told of how John W. Gates, John W. Drake, and John W. Lambert, another associate, were watching a heavy rainstorm come up. It was thundering and lightning terrifically.

Gates stood in front of the window and watched the rain-drops slip down the windowpane. He observed that not all of them moved at the same speed. Turning to Drake, he pointed out that two raindrops, moving down evenly, offered a good chance to make a bet. Gates bet that the right drop would reach the bottom first. The stake was $100. As the race of the raindrops continued the stakes went up into the hundreds of dollars and the men cheered those raindrops with as much enthusiasm as they ever did a horse. Gate's "horse" won the race.

Note: previous content was removed Sunday morning after having second thoughts about it.

Currently playing in iTunes: All At Once by Jack Johnson