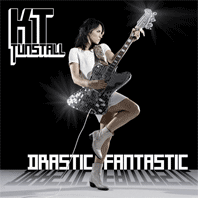 Like many I suppose, I discovered KT Tunstall during her live session at the Apple Special Event on September 5th (Tip: scroll to 01:14:30 of the webcast to view her performance). I thought she gave a stunning performance in front of a audience of computer geeks and Apple shareholders. I was enthralled by her overall energy and sound of her voice. Eyes closed, she sounded almost like an afro-american soul singer. Needless to say I bought her first album Eye to the Telescope only minutes after having pre ordered my iPod Touch.

KT Tunstall's second album was on pre order at the time. Drastic Fantastic, produced by Steve Osborne, might seem a little more tamed at first, but it just a first impression. I was very much immersed in the acid-tongued, smart, self powered energy and the glitzy sound of her first album when I first listened to it. It grows on you. There is a kind of 1997 flash back, with massed acoustic guitars, a carefully controlled voice and the smooth beats. But she puts it all together in a very personal way. Each track with it own personal specificity. Not only does she take up where she left, but certainly moves on too.

On certain tunes, you can't help but to think of Chrissie Hynde, PJ Harvey or Patty Smith, except that KT Tunstall is well in to today's stream and pop vibes. She certainly hasn't said it all.

She's a free element. Free to play with her high-gloss folkie style and mix it up with professional pop smarts. Don't tell her that this album is everything but a sequel to Eyes to the Telescope.