I've setup my brand new Airport Extreme base station with success about ten days ago, and was excited to test out the new Airport Disk feature. I intended to transfer my iTunes library onto an external disk, and share it through the Airport Extreme's new sharing feature as described in a previous post on multiple iTunes librairies.

The truth is that it works just as described. The new admin software is really easy to use. The disks mounts automatically when you register in the Airport network. iTunes manages the remote library just fine, and enables my to have my main music library available from any computer, while retaining a subset on my MBP to carry around with me.

Everything runs fine, except for one little annoying bug: if the drive is not unmounted before logout, the session hangs on the blue screen after the Finder quits. My Mac blue screen of death. The only workaround at that point is to force restart the computer (sigh, I hate to do that). This situation occurs when you logout, restart or shutdown. 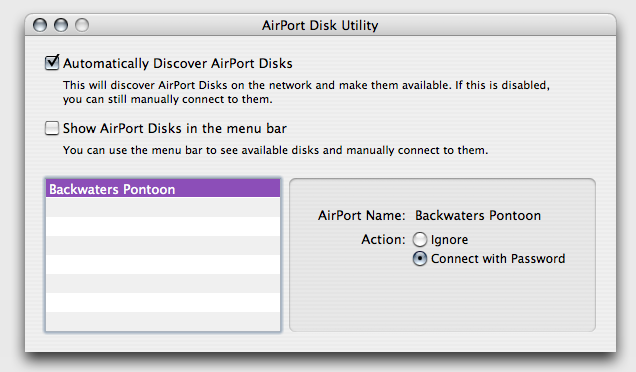 Exploring the system logs, you'll discover that a number of processes stopped responding during the logout, namely coreaudio, mds, ATSServer and coreservicesd. I suspect the main culprit is the ATSServer but unfortunately, there's no way to kill the process except from another computer via an ssh session e.g.. There is a short thread on Apple Discussion related to this issue.

I guess this qualifies as my current "Mac Whine" as seen “heard? “on MacBreak Weekly. Another issue related to the poor way Mac OS deals with mounted volumes.

This currently occurs on my MBP running Mac OS 10.4.9. I haven't had the opportunity of trying other hardware (PowerPC) and software (10.4.x) combinations to see if it occurs all the time. It might be Intel related for all I know. I'll post an update whenever I get more information.